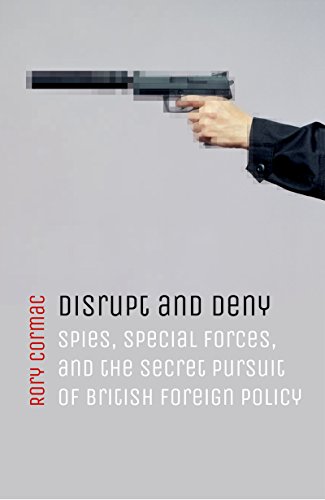 British leaders use spies and Special Forces to interfere in the affairs of others discreetly and deniably. Since 1945, MI6 has spread misinformation designed to divide and discredit targets from the Middle East to Eastern Europe and Northern Ireland. It has instigated whispering campaigns and planted false evidence on officials working behind the Iron Curtain, tried to ferment revolution in Albania, blown up ships to prevent the passage of refugees to Israel, and
secretly funnelled aid to insurgents in Afghanistan and dissidents in Poland. MI6 has launched cultural and economic warfare against Iceland and Czechoslovakia. It has tried to instigate coups in Congo, Egypt, Syria, Saudi Arabia, Iran, and elsewhere. Through bribery and blackmail, Britain has rigged
elections as colonies moved to independence. Britain has fought secret wars in Yemen, Indonesia, and Oman — and discreetly used Special Forces to eliminate enemies from colonial Malaya to Libya during the Arab Spring.

This is covert action: a vital, though controversial, tool of statecraft and perhaps the most sensitive of all government activity. If used wisely, it can play an important role in pursuing national interests in a dangerous world. If used poorly, it can cause political scandal — or worse.

In Disrupt and Deny, Rory Cormac tells the remarkable true story of Britain's secret scheming against its enemies, as well as its friends; of intrigue and manoeuvring within the darkest corridors of Whitehall, where officials fought to maintain control of this most sensitive and seductive work; and, above all, of Britain's attempt to use smoke and mirrors to mask decline. He reveals hitherto secret operations, the slush funds that paid for them, and the battles in Whitehall that shaped
them.